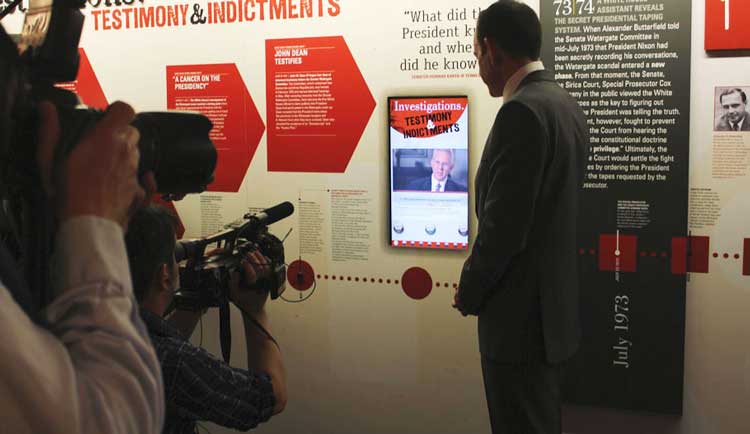 For years, some historians dismissed the Watergate exhibit at the Nixon Presidential Library as a whitewash. That has changed. A revamped exhibit at the Yorba Linda museum now documents in exhaustive detail the events that led to the downfall of a president.

Voices of the scandal swirl around you in a long narrow exhibit hall.

In one corner, a former Nixon loyalist ruefully recalls the scandal. In another, Nixon converses in the Oval Office.

"There are materials in this exhibit that were not publicly available in 1990 when the other exhibit was put in," says presidential history Tim Naftali. Like what? "Well, tapes!"

Naftali is director of the Nixon Library and Museum. He took over when the private Nixon Foundation ceded control of the museum to the National Archives four years ago.

The Foundation presented a version of Watergate that was more sympathetic to Nixon. It glossed over key events and omitted hours of incriminating Oval Office secret recordings.

"Over 200 hours of tapes – which the National Archives calls the “Abuse of Power” tapes – were released in the late ‘90s," says Naftali. "We have made a lot of use of those tapes."

Listen in on conversations between Nixon and chief of staff H.R. Haldeman, the so-called “Smoking Gun” tapes. It’s one week after the bungled break-in at the Democratic Party offices at the Watergate complex. The burglars are connected to the president’s re-election committee.

Nixon and Haldeman conspire to derail the investigation by pressuring the CIA to throw up a smokescreen – tell the FBI the investigation could threaten national security. It’s a lie and obstruction of justice – an impeachable offense.

“You call them in,” says Nixon. “Play it tough.” Haldeman agrees.

“Don’t lie to them,” says the president. “Just say it’s a comedy of errors, we wish for the country – don’t go any further into the case.”

"The CIA says no, makes it clear they’re not gonna do it," says Naftali. "And then the president has to find a different way of covering up. And we let you listen to the president talking about the problems he faces and also talking about paying the burglars."

Nixon and White House attorney John Dean discuss paying up to a million dollars in hush money to some of the Watergate burglars. Dean is willing, but isn’t sure how to pull it off. “We’re not criminals,” he says. There’s a pause. “How much?” asks President Nixon.

"I would say these people are going to cost a million dollars over the next two years," says Dean. “We could get that,” says Nixon. “I know where it could be gotten.”

The revamped Watergate exhibit includes excerpts from Nixon’s historic TV interviews with British journalist David Frost. "All right, fine," says Nixon. "Now let me just stop you right there! You are doing something that I will not do during these broadcasts. That is reading from transcripts!"

"I’d say you endorsed or ratified it, but let’s put that aside," says Frost. "I did not endorse or ratify it!" Nixon interjects.

"... for a minute. Why didn't you stop it?!" says Frost. "Because at that point," says Nixon, "I had nothing to... no knowledge that it was going to be paid. I didn’t believe we were covering any criminal activity. I was trying to contain it politically."

The private Nixon Foundation couldn’t contain the flood of Watergate documents now available, either. It filed numerous objections with the National Archives over the exhibit’s new content – but ultimately relented.

One issue was the tapes. Defenders point out that Nixon wasn’t the first president to wiretap his offices.

Lyndon Johnson did it; so did four presidents before him. Johnson usually had his tapes transcribed immediately.

There’s no evidence that Nixon ever even listened to his – and yet the tape kept rolling, even as the scandal deepened. Why?

“He talks about it a little bit on the tapes in the first week of taping in February 1971," says Naftali. "He talks about leaking some of the best material, transcribing it and leaking it because he feels the public doesn’t really understand... the real Richard Nixon.”

Nixon Foundation chairman Ronald Walker said the restored Watergate exhibit “represents one interpretation.” He encourages library visitors to consider Nixon’s life “in full – its peaks and valleys.” With the opening of the Nixon Presidential Library’s revamped Watergate exhibit, you see the valleys – flat and wide.