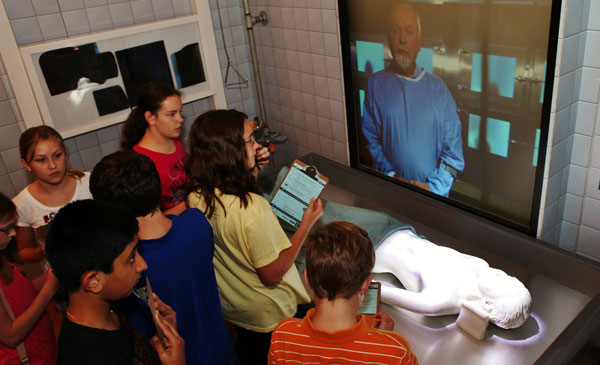 CSI: The Experience is a completely immersive exhibit that invites visitors to enter crime scenes where they identify and record evidence. It takes them inside laboratories for scientific testing and autopsy rooms for pathology analysis. Then it returns them to the office to build their case, based on the scientific evidence. The exhibit brings to life real scientific principles and the most advanced scientific techniques used today by crime scene investigators and forensic scientists.

From DNA and firearms analysis to forensic anthropology and toxicology, visitors are immersed in hands-on science in an exciting multimedia environment with dazzling special effects direct from the “CSI” TV series. Via videotaped messages, cast members from the TV show welcome guests into the exhibit, lead them through the experience and praise them for a job well done at the end. The exhibit is geared toward adults and youth age 12 and above.

“This project was extremely gratifying, because we had a strong collaboration between television producers and educators,” says Van Romans, president of the Fort Worth Museum of Science and History. “There was always a strong motivation to use ‘CSI’ as a way to interest and motivate young people to get engaged in science and problem solving. It was a great example of the synergy that can happen when education and entertainment work hand in hand.”

“CSI: The Experience was the fruit of a truly unusual partnership,” says Charlie Walter, the Museum’s chief operating officer. “Our partners included the Science Museum Exhibit Collaborative, media giant CBS and the National Science Foundation, which provided $2.4 million in funding for both the exhibit and a ‘CSI’ ‘Web Adventure’ targeted to underserved youth.

The exhibit made its debut in May 2007 at Chicago’s Museum of Science and Industry before embarking on its national tour.