American folk hero Woody Guthrie gets is own museum in Tulsa

TULSA, Oklahoma — — It took Woody Guthrie's hometown of Okemah more than 30 years after his death to finally celebrate his life and work with an annual music festival, and signs of acknowledgment in other parts of Oklahoma have been rare.

Monuments and exhibits honoring Guthrie, one of America's greatest folk singers and songwriters who died in 1967, were scarce as attitudes about his perceived leftist allegiances lasted more than a generation.

But the opening of the 12,000-square-foot Woody Guthrie Center Saturday in Tulsa doesn't mark some uneasy truce between Oklahoma and the Dust Bowl balladeer and his kin. The center's debut kicked off a two-day celebration that affectionately, albeit belatedly, welcomed the native son home with open arms and all the fanfare his longtime supporters can muster.

Nora Guthrie, daughter of Woody Guthrie, with the first guitar her father gave to her older brother Arlo Guthrie along with a mandolin and fiddle of his father's. (Steve Olafson, Reuters)

"I realized that everything Woody learned — empathy, compassion — all of this stuff he learned in Oklahoma," the late singer's 63-year-old daughter, Nora Guthrie, told The Associated Press. "He got all his ideas initially here. The core of who he was was determined in Oklahoma, and that's something that everyone in Oklahoma should be very proud of.

"Woody always wrote songs that make you take pride in yourself and in your work and in your children."

At its heart, the center tells the story of a simple man who loved America as much as any of its citizens and had the courage to stand up to his country when it was gearing off course or mistreating the impoverished or disenfranchised, said Bob Santelli, executive director of the Grammy Museum in Los Angeles, which will help operate the center.

"All he wanted to do was tell the musical story of a people who couldn't tell it themselves," Santelli said.

To illustrate that American story, the center features as its centerpiece Guthrie's original, handwritten version of "This Land Is Your Land," perhaps his best-known song.

The building in the Brady Arts District will also house the Woody Guthrie Archives, a collection featuring nearly 3,000 song lyrics, hundreds of pieces of artwork, journal entries, postcards, manuscripts and more than 500 photographs, among other rare items. The archives will be open to the public by appointment for research use.

The archives were purchased in 2011 for $3 million by the George Kaiser Family Foundation. Kaiser is a lifelong Tulsa resident and, according to Forbes, one of the wealthiest people in the U.S. with a net worth around $10 billion. He is chairman of BOK Financial Corp. and a major shareholder in various energy and technology companies.

"The Guthrie family has inspired us with their loving and creative stewardship of these materials, and we are proud to provide a permanent home for this incredible collection," said Ken Levit, executive director of the George Kaiser Family Foundation.

Inside the center, video touch screens and interactive exhibits await visitors at almost every turn, bringing Guthrie into the digital age.

One exhibit is a multimedia tour of the Dust Bowl with pictures, artifacts and a video featuring black and white clips of the environmental disaster that wreaked havoc on the Plains in the 1930s and served as the inspiration for many Guthrie songs.

Another exhibit, called the Music Bar, lets visitors choose a Guthrie song on a computer screen and listen to the selection with headphones. 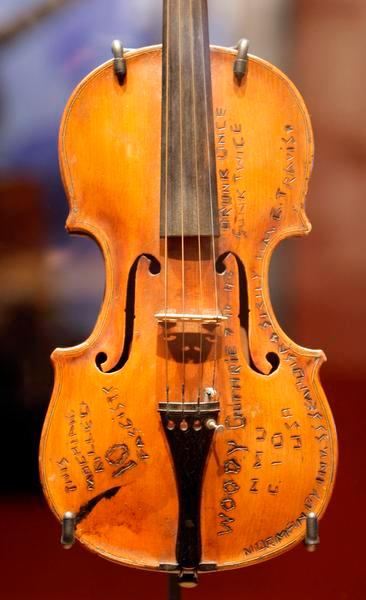 Woody Guthrie carried his violin with him during WWII, carved and woodburned with references to the time. (Steve Olafson, Reuters)

The center also features objects from some musicians who were influenced by Guthrie, including Bob Dylan and Pete Seeger.

"We're pushing at different sides of Woody that maybe have escaped the myth."

Santelli said Guthrie's contribution to American music is profound because the topics he wrote and sang about — immigration, banks, the poor, the environment — are still relevant.

"That's why his music lives and breathes today," the Grammy Museum executive director said. "He was a very, very simple person ... who had his finger on the pulse of America."